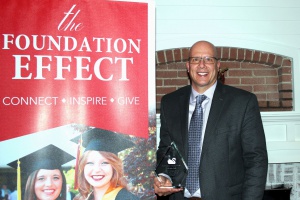 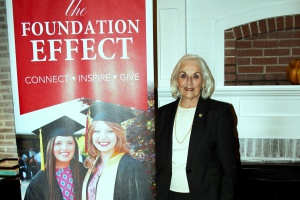 Willie Podestá Young, received recognition as the Outstanding Philanthropist for the year. Young’s connection to Lake Land dates back to the beginning of the college with a portion of the college sitting on land obtained from the Podestá family. Her parents, the late Dr. William and Margaret Podestá, were recently honored with a park on campus in their name: The Dr. William L. and Margaret Podestá Park.

“The park on Lake Land’s main campus, was the vision of Mrs. Young. She approached the College with an idea that would enhance the campus while creating a lasting legacy that memorialized her parents,” Hartke said. “The Dr. William L. and Margaret Podestá Park is the main focal point as guests exit the new addition and main entrance to the Luther Student Center.” 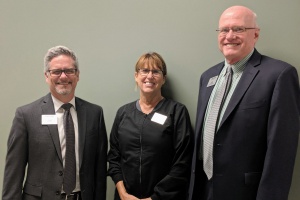 “Debbie worked tirelessly to facilitate the Heartland Dental Dental Hygiene Lab renovation,” Hartke said. “She is a great volunteer fundraiser as she continues to regularly network with Heartland staff to help build the relationship and the program. Personally, Debbie is a Power Laker with over 10 years of continued giving to the foundation and a member of the Faculty Club giving society for her lifetime giving.” 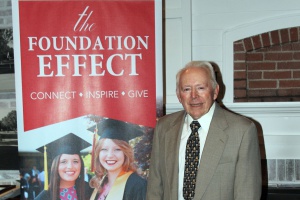 “To date, the Leona Stanford Vollintine Trust has awarded over 100 scholarships to Lake Land students totaling $193,000. That is the Foundation Effect in motion!” Hartke said. “Lake Land College is just one of several educational institutions benefitting from Mrs. Vollintine’s generosity that includes public and private colleges and universities in Illinois and Colorado. The trust gives approximately $20,000 annually for scholarships in Mrs. Vollintine’s name at Lake Land College, making the trust a member of the President’s Silver Council Society for lifetime giving.”

This award is bestowed upon corporations, small businesses, industry, community organizations and private Foundations who have demonstrated dedication and commitment to the overall educational experience of Lake Land College students by providing sustaining financial support through a pattern of reoccurring gifts and pledges making a significant difference at Lake Land College.

This award is bestowed upon individuals who have demonstrated dedication and commitment to the overall educational experience of Lake Land College students by providing sustaining financial support through
lifetime contributions, and pledges or planned gifts, as well as service to the college and the community.

This award is bestowed upon an individual who has given gifts of time and talent on behalf of Lake Land College students in securing private funding. The efforts of this individual serve as an example to others in making a difference in the lives of our students.

The Crystal Swan Award is awarded to a Lake Land College Foundation Board Member who has gone above and beyond.

Back to the top